“It’ll be too loud, too dangerous. Nobody’s gonna want to buy that.” This is what Arthur Davidson said about a bigger, stronger, faster motorbike, according to the miniseries Harley and the Davidsons. Throttle forward a century, and now there are nearly 10 million registered motorcycles in the United States. The industry faces completely opposite doubts as electric motorcycles begin to enter the market. People are saying they will be too quiet, too weak, and you won’t get far enough on a battery charge. Come take a look at the best electric motorcycles to change your perception.

Electric motorcycle technology continues to evolve, and some of these new bikes could surprise you. The new breed of electric motorbikes may be quiet, but they are not really weak or limited to short ranges. They do tend to be noticeably pricier than their gas-guzzling counterparts, though.

Regardless, if you are ready to dump the pump, here are some of the best electric motorcycles out there. The Harley-Davidson LiveWire has been a tantalizing concept for years. Now it’s a reality, but it isn’t cheap starting at $29,799. Regardless, it marks a new era for Harley-Davidson. Not to mention, we have seen plenty of enthusiasts pay more for their Harleys.

The Harley-Davidson LiveWire looks tough, but you may also notice the aesthetic language has evolved to a more sporty one. This is likely due to Harley-Davidson’s attempt to attract newer generations, which they have been struggling with.

Though fully electric, the Harley-Davidson LiveWire is no slouch. It can go from 0-60mph in three rapid seconds and has an electronically limited top speed of 95mph. Range is not the best at 146 city miles, but it is also not half bad, especially considering it can be fully charged in one hour using standard DC fast charging. Pursang may be a relatively new brand, but the company is actually rebirthing a classic motocross bike from 1967. This motorcycle comes with a new twist and an 11kW Bosch motor with a trio of batteries for 7.2KWh of juice, which gives it plenty of power and capacity to take on the streets. It also comes with a gorgeous cafe racer-style design motorcycle enthusiasts will love.

The Pursang E-Track can go for 140km on a single charge, and its top speed reaches 120km/h. It’s a serious bike with a serious price, as it costs €13,700. And while it doesn’t seem like it, the electric motorcycle is made to accommodate two people.

You can’t buy the Pursang E-Track just yet, but you can reserve yours and the first units will be shipped in 2021. The Johammer J1 200 has to be one of the most interesting motorcycles we have ever seen. It’s… cute? Weird? Let’s settle with unique, and that is exactly why we like it. This is not simply a motorcycle with a replaced mechanism — it’s a new breed.

Johammer decided to move away from traditional bike designs, simply because it could. There is no longer a muffler to worry about, or a motor shape. In fact, there are many components manufacturers no longer have to deal with when making electric motorcycles. Not to mention batteries can take many shapes. Why stick with traditional bike forms?

The Johammer J1 is technically a scooter, but it’s not a bad one at that. Speed is electronically limited to 75 mph (120km/h), which is good enough for most highways, and range is estimated at 124 miles (200km). The Johammer J1 is a bit pricey at €24,900, but it’s a unique bike that is sure to start a conversation or two.

The Zero FXS is one of the company’s best electric motorcycles and comes with a more accessible price tag attached. You can definitely see that reflected in the specs, though. The FXS has a 50-mile range and has a top speed of 85mph. The vehicle can produce 78ft-lb of torque and the unit weighs 251lbs. You can get an additional battery, but it will cost significant cash.

Regardless, many will like the rugged style and high suspension length. The Zero FXS is a street-legal bike, but it can definitely be taken off-road too. Zero is known for its minimalist naked and adventure-style bikes, but they now have a bike with a sports body that will definitely get many of you riled up. It looks every bit as good as the super-motos and is definitely one of the best electric motorcycles out there. 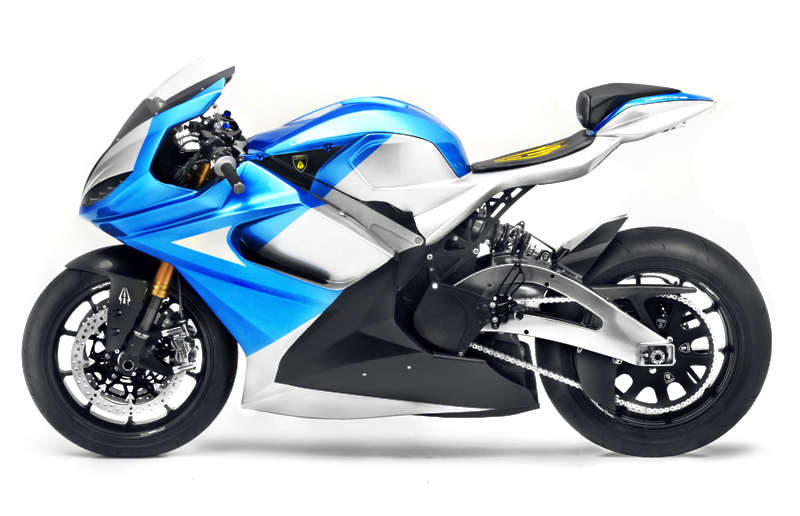 The Lightning LS-218 is the world’s fastest production electric motorcycle and it is, frankly, ludicrous. It comes with 150 kW of power, so the electric equivalent of 200 bhp and 168lb/ft of torque. That’s more than BMW’s all-conquering, fossil-fuel burning S 1000 RR. It is also a few pounds lighter at 495lb.

The end result is a bike that can storm through the 60mph mark in two seconds and leave almost anything on the road trailing in its non-toxic wake. This has become one of the flagbearers for electric power, and it even made a powerful impression on Jay Leno.

The 218 mph top speed is a conservative estimate based on the speed the bike actually achieved on the Bonneville Salt Flats. Now, with a number of new developments on the final production bike, the manufacturer claims it could be even faster.

The LS-218 is almost too much bike for the public road. It’s a race motorcycle with plates, and it isn’t for a novice or the faint of heart. It is, though, an awesome machine and we should celebrate its mere existence. This is definitely one of the best electric motorcycles around, if not the very best. It will cost you, though. Prices start at $38,888 and can go up to a whopping $46,888. Sports bikes fanatics will love the Damon Hypersport Premier. It has the looks to turn heads on any street, as well as the guts to speed through any highway. This thing is a beast, and it’s definitely one of the best electric motorcycles you can find.

This machine can be taken up to 200mph and has a whopping 200hp. The 200-mile range is also no joke. Not to mention it can get from 0-60mph in under three seconds. You also get other high specs like Brembo brakes, Ohlins suspension, 4G connectivity, and a single-sided swingarm. It even has cameras and neat features like collision detection and warnings. Not only that, but the pegs and handlebar can be moved in order to accommodate different riding positions.

All of this awesomeness will cost you, though. The Damon Hypersport Premier costs nearly $40,000. The Energica Ego Plus looks like a million bucks, and it performs like even more. This Italian superbike is all sharp angles and flat surfaces rather than the traditional curves. It looks modern and will stand out from the crowd.

The original Energica Ego was one of the first serious electric motorbikes and it was designed by a team of Le Mans and F1 engineers that specialize in rapid prototyping for the big teams. This newer, improved version is even better. It can reach 150mph, is pulled by 145hp, and has 159 ft-lb of torque. Max range is also amazing at 250 miles. That’s some real power. Here’s another high-end electric motorcycle for cafe racer-style enthusiasts. The Tarform Luna takes on the whole look, while also innovating with the latest technology.

There are some great smart features to keep your ride more enjoyable and safe. For example, the display can connect to your smartphone via Bluetooth for better control and monitoring. The bike has blind spot detection with haptic feedback. You can enjoy keyless proximity ignition. Not to mention the 180-degree rear-view camera. The Cake Kalk& looks like it’s coming from the future, although it’s pretty pedestrian when it comes to raw power. Street-legal but unafraid of the dirt track, this cool electric motorbike is designed to be the all-rounder you can commute with during the week and the rip the dirt during the weekends.

The Kalk& is available from €14,000, which is not exactly cheap; at least you can have it within as little as one week after your order. The top speed of 56 mph and range of 51 miles are just enough, if all you want is a fun commuter bike. Sondors is a well-known manufacturer of electric bicycles, but now the company is setting its sights on electric motorcycles and even an electric car. The Sondors Metacycle is the first result of this expansion effort, and it looks great.

The highlight of the Sondors Metacycle is its distinctive cast aluminum “exo-frame” that offers an easily accessible low profile. With its 20hp (14.5kW) power motor and 4kWh battery, the Metacycle can take you 80 miles on a single charge at a top speed of 80mph (130km/h). The torque goes up to 130 ft-lbs and the weight of the bike is around 200lbs (90kg).

The Metacycle may not be the most powerful electric motorcycle on the road, but it’s among the more accessible ones – currently in the pre-order stage, the bike will set you back just $5,000.  The current delivery calendar claims orders will ship from Q4 of this year. The Finnish-made Verge TS hits 111mph (178km/h) and goes 0-60mph in under 4 seconds. It also looks stunning in the process, with its integrated rim motor and angular lines. Besides looking cool, the rim motor delivers huge torque and a maintenance free experience.

The manufacturer claims a range of up to 186 miles (if you only ride through the city), and fast-charging means you can top up 100km of range in just 15 minutes.

Available for pre-order right now, the Verge TS looks like the complete package — a stylish, hella-fast motorcycle that also happens to be green.

This completes our look at some of the best electric motorcycles that can be ordered right now. Stay tuned for updates and let us know what your favorite is.