The G4 is Gotrax’s overall best-selling scooter, but is it worth your money? While there are some valuable features, the Gotrax G4 is a rather bulky e-scooter that leaves room for improvement. Here’s a hands-on review to help you decide if the Gotrax G4 is right for you.

What you need to know about the Gotrax G4

The Gotrax G4 is a big, chunky scooter that certainly feels heavier than its weight of 37 lbs. On the bright side, you get a large baseboard to stand on and ten-inch shock-absorbing tires. Aside from the scooter, the power adapter is also the bulkiest I’ve seen, measuring 5.5″ x 2″ x 2″. Assembly can be a bit frustrating as the provided hex key was loose in the box, which took some fishing around to find and wasn’t even sufficient to install the four screws. I ended up having to use a power drill to fasten them.

There is added security on the Gotrax G4, such as a display lock with a three-digit code that will lock the wheels and cause the scooter to beep if not entered correctly. I found this a bit annoying, but it can be disabled. There’s also a built-in 4-digit cable lock in the stem, which you can use to secure your scooter around a post or fence. Just make sure to remember your combination.

Lastly, this e-scooter didn’t quite live up to the claimed 25 miles of range, as any hills traveled en route would bring that number down to around 20 or 21 miles. If you plan to travel any farther, you’ll need to make room for that big power adapter in your pack. Theft-resistant: The Gotrax G4 doubles up on security measures with a built-in four-digit combination cable lock in the stem and a three-digit electronic lock, which are nice deterrents against anyone trying to steal it. The cable lock extends up to 22 inches to secure around most posts or bike racks, though it’s not strong enough to resist any serious cable cutters.

Sturdy build: Perhaps the opposite of a sleek and smooth design, the G4 features a relatively rugged build quality with big metal components. I felt like if I were to crash, there would be strong protection here. The handlebar grips aren’t exactly comfortable but do keep the sweatiest of hands holding on. In exchange for style, you get a sturdy, reliable ride.

Real reflectors: Unlike other e-scooters in this price range that just have reflective stickers, the Gotrax G4 has actual reflectors encased in hard plastic. The downside of stickers is that they wear out, and you will have to replace them if you haven’t managed to misplace the spares. Here, however, you needn’t worry about your visibility wearing out. 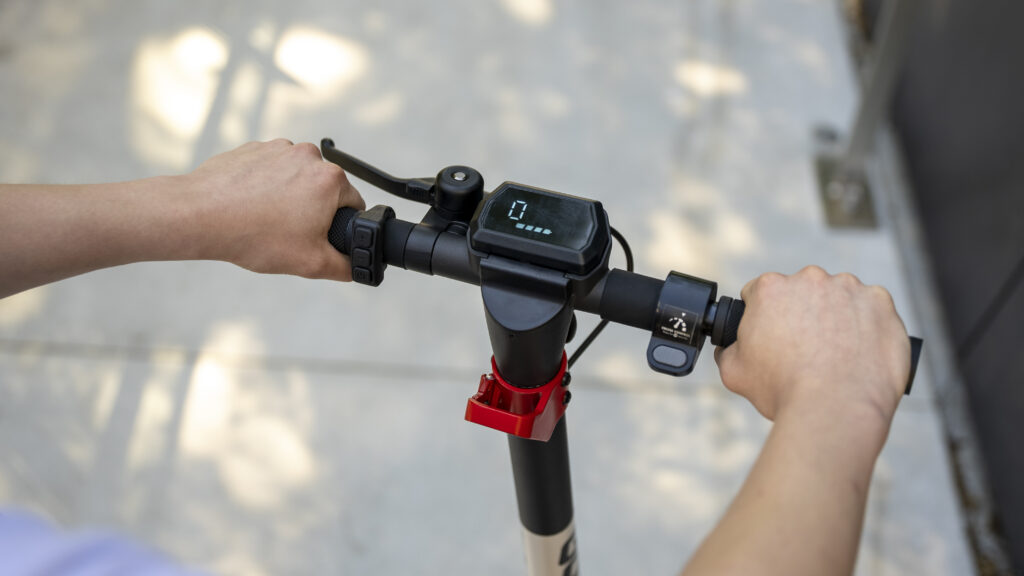 Heavy: The Gotrax G4 weighs 37 lbs, but its larger size makes it feel heavier to carry than the Segway Ninebot Max, which weighs four more. The metal folding clip will keep it secure, but you won’t want to carry this thing for long distances unless you want a workout.

Touchy throttle: I experienced frequent issues with the throttle’s responsiveness, which required several presses to engage the motor after each time I stopped. Combined with the push start, this made getting going a little tedious and unpredictable.

Cluttered and confusing dashboard: Unfortunately, G4’s dashboard is anything but intuitive. On your left, you’ll find a bell that is rung by pulling back, not forward, and a lateral set of three buttons. To switch up a gear, you press the Plus button, and to switch back down a gear, you press the Minus button. I can’t help but feel Gotrax could have achieved all these functions with a double-press of the power button. Turning on the headlight also required holding the power button for three seconds, which isn’t too helpful if you need it immediately.

Should I buy the Gotrax G4 e-scooter? If you are looking to buy your first electric scooter and don’t want to spend too much money, then the Gotrax G4 is a good option. It’s beefier than the Gotrax GXL V2 and has higher-grade parts, such as a metal locking clip to keep the scooter folded instead of a cheap plastic latch, but it also makes it quite heavier. The two-speed modes make it accessible to first-time riders who don’t want to go too fast but need a little more pick-up on the incline, although you won’t get a ton of range.

Here’s a checklist of questions that, if you answer yes to, you should go with the Gotrax G4:

Now on sale for only $552 ($248 off), the Gotrax G4 is an excellent deal for riders concerned about safety and durability for quick commutes. With two different anti-theft measures, you can have peace of mind knowing your e-scooter is safe without having to buy an additional lock. Plus, the hard-plastic reflectors and bright headlight will make you visible for nighttime riding on the road.

However, there is a bit of a learning curve when it comes to the dashboard controls, and you will have to bring the bulky power adapter along for longer distances. If you want more range with slightly higher speeds, I recommend bucking up for the Segway Ninebot Max instead.

Q: How to reset the Gotrax G4 scooter

To cancel the display lock, long press the “+” button and the power button together for ten seconds. When you hear an alarm sound, that means it was successful.

A: The Gotrax G4 is worth it if you want a durable e-scooter with added security features. However, it doesn’t have the longest range or highest speeds, so it is best to use for short commutes.

Q: How fast does the Gotrax G4 go?

A: The G4 has an IPX5 rating, meaning it is water-resistant but not waterproof. In other words, do not get the e-scooter wet.

Q: Does the GoTrax G4 have regenerative braking?

A: Yes, the G4 relies on a dual-braking system made up of a rear disc brake and an electronic regenerative brake that gets activated once the brake is pulled.