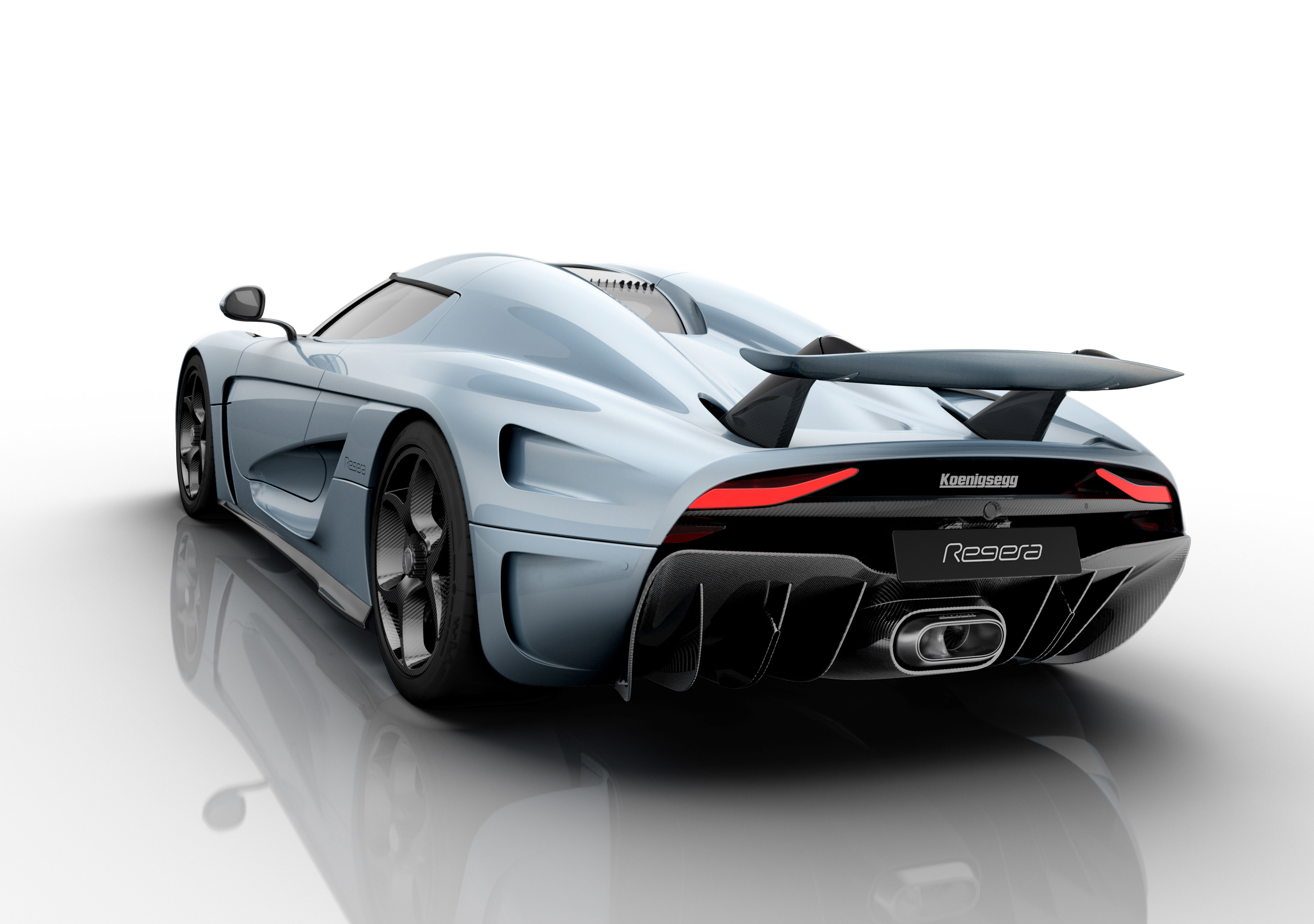 When Christian von Koenigsegg launched his self-titled car company from an airfield in Sweden in 2006, he was all about insane horsepower numbers and record breaking top speeds. He still is.

The company has evolved along the way. Now Koenigsegg regularly comes up with technical innovations that you’d expect from the likes of Ford or BMW, not a miniscule supercar company producing a handful of cars with outrageous price tags.

They include the camless engine, the Direct Drive single gear box and triplex rear suspension that includes an additional shock absorber to spread the load.

How the Swede manages to offset the development budget with such a small number of sales is a question for his undoubtedly long-suffering accountant. We can just revel in the mad science and pay tribute to a man that clearly just loves cars.

So when he set to work on a hybrid, the Koenigsegg Regera, we knew it was going to be something special. We just didn’t know how special. Technically, this car makes the Bugatti Chiron look about as advanced as a crusty old box of books that nobody has read in decades.

Despite their madness, perhaps because of it, Koenigseggs rarely get the column inches they deserve. So let’s set the record straight and delve under the skin of one of the most remarkable hybrids on the planet today.

Let’s just get this one out the way up front. Koenigsegg doesn’t make cars that remotely resemble cheap and the Regera starts at about $1.9 million. It’s huge, it’s a fortune, there’s no getting round the fact. But for the 1%, the ones that are looking for the absolute best, you can make a case that it’s good value.

The Bugatti Chiron costs this much and while you can argue that the VW-owned brand has greater cache, you can make a more powerful case for the Koenigsegg.

Real innovation costs money and Koenigsegg is constantly pushing the boundaries of car design. So for those that simply want the best, the most advanced and the most stylish, this is the one you want.

It is also destined to remain much more exclusive than the Chiron. Just 80 Regeras will see the light of day and for the kind of people with the money to buy this car, it matters that none of their friends have one.

The Regera body is based on the petrol-powered Agera, but it has been widened to accommodate the substantial 4.5kWh battery pack in a safety cell in the center of the car to protect it in the event of an accident.

Koenigsegg has also tweaked the aerodynamics and styling to give the Regera a distinctive look and we love that low-slung front splitter and the rounded nose that combine race car purpose with luxury car grace. It’s a fluted, long looking car that is designed for high-end speed, but Koenigsegg also wanted it to be a Grand Tourer that his customers could use in absolute comfort.

That’s why every body panel comes with a hydraulic kit that means it can be opened remotely, which Koenigsegg calls Autoskin. It’s also why the roof panel lifts out and stashes in the front luggage compartment to provide open top motoring without the compromise of a cloth roof.

The whole car is made from carbon-fiber and it weighs in at 3510lb, which is remarkably svelte for a big power hybrid.

This is where the magic really happens. The Agera was already a missile and the Regera gets its own version of that 5-liter, twin turbo V8. That produces 1100bhp@7800rpm and 941lb/ft of torque at 4100rpm. Koenigsegg could have stopped right there. No car needs that much horsepower, but he wasn’t done by a long shot.

So he went ahead and fitted three, yes three, electric motors from YASA. The first is a 160kW (215bhp) motor that drives the crankshaft, acts as a starter motor and also provides torque fill for the twin turbo engine.

Now I don’t know a single person, ever, that said he could feel the dead spots in the torque curve in an 1100bhp engine, or anybody who complained about turbo lag in a car that is just too fast for the average human brain to keep up with. But nonetheless, there is an element of turbo lag and Koenigsegg has removed it with this one electric motor.

Two further, driveshaft-mounted electric motors with 180kW (241bhp) each add to the sheer lunacy of this, but also provide one of the cleverest technical innovations that we’ll get to in one moment. For now, you just need to revel in the figures. This car, just this one car, has 1797bhp – in theory.

Of course the electric motors and the internal combustion engine hit their peak power at different points and they’re not designed to just go for maximum attack all of the time. It’s a more subtle set up and that means that the peak power is limited to around 1500bhp and 1475lb/ft of torque. Show me the person that needs more and I’ll show you the asylum they need to check into.

Incidentally, Rimac supplied the 800 Volt, 4.5kWh battery that weighs in at 250lb and Koenigsegg claims it’s the densest battery in terms of power that has ever been fitted to a production car. Yes, remarkably, even though the likes of the McLaren P1 and LaFerrari can barely turn a wheel without sparking their petrol engines, the Koenigsegg can pootle round happily in all-electric mode. The reason is yet another clever technical innovation that the Swedish company deserves big props for.

At low speeds a hydraulic coupling basically detaches the engine from the drivetrain. It just isn’t involved and sits there like a heavy passenger. That means the car can skate round town effortlessly, silently and without sipping a drop of fuel. It just leans on the electric motors on the driveshafts and you’d never know you were driving Satan’s hypercar.

When it hits the 30mph mark, the coupling comes into play, the engine connects to the drivetrain and then you’ve got the full Monty once again with all the power heading through a 2.73:1 rear differential.

This is such a trick piece of kit that it deserves its own special mention. This goes well beyond the traditional automatic gearbox, which is massively complex and contains all the gears and just controls them automatically. Koenigsegg has effectively removed the gearbox and replaced it with one single gear.

It still comes with paddle shifters, but they’re linked to that hydraulic coupling and don’t really shift at all. ‘Shifting down’ actually links to the regenerative braking to give a similar effect to a traditional downshift. Shifting up causes a slip in the hydraulic coupling, boosting the RPM and recreating the effect allowing the engine to unleash more power and torque through the rear wheels.

The car doesn’t even have a reverse gear. When you select reverse it simply flips the supply from the electric motors, decouples the engine and relies on the magic of reverse current through the motors to do the job.

Predictably, the acceleration offered by this much power is simply mind-numbing. It’s rear-drive, so the real limit on the traction off the line comes from the tires. So the 0-60mph time of 2.7s is impressive, but it really doesn’t tell the full story. Turn the infinitely variable traction control down and you get something approaching the truth as it immolates its rear tires on command.

This is just brutal acceleration and it’s hard to get your head around how fast this car is unless you have experienced full bore acceleration in a Bugatti Veyron, a Formula One car or a fighter jet. Rest assured, though, that this is a league above almost anything in the world. There’s almost nothing that can really stick with this car.

Plain and simply, it’s one of the fastest things on the road, it’s brutal through the whole range and if you push the loud pedal down then it will basically set your hair on fire.

In all honesty, this car could go faster than 250mph. There is a cut-off point, though, which is often connected to the tires. Beyond 250mph, the choice of rubber is basically non-existent, the car requires custom tires and Koenigsegg would have to make some serious compromises with the handling and NVH to get the strength required in the sidewalls for 20mph at the top end that nobody will ever use.

This car is built for blinding acceleration and the top end speed is almost a consequence of over-engineering at every step rather than the actual goal. It’s an incredible figure, though, and only the Bugatti Chiron can really say it’s got the edge on the Regera when they’re both flat out. Even that, we’d have to see to  truly believe. Christian von Koenigsegg insisted that this car would be a luxurious GT car, rather than a racing car for the road. That philosophy goes right down to the engine mounts, which are active and designed to stay soft at low speed to reduce the noise and vibrations inside the car. They firm up at speed to help the handling.

The Regera also gets memory foam seats with 8-way adjustment, which is basically as good as anything you’ll find in a Mercedes S-Class, without the built-in massage of course. You just shouldn’t need to relax that much in a car like this.

It comes with a 9” screen that controls the infotainment, ambient lighting and you also get WiFi and internet access. You can even make a movie with cameras at the front, inner and rear all linked to a central recorder.

Koenigsegg deserves far more credit than has come his way for creating one of the most innovative hybrids, the most interesting hypercars and just plain and simply one of the fastest cars on the road today. The only logical competitors are the Chiron and Rimac One and the Rimac is made in such limited numbers that really the Chiron is the logical benchmark.

Bugatti flirted with a hybrid, but didn’t go for it. So it served up a bigger portion of the same technology. The Koenigsegg, meanwhile, is 900lb lighter, it’s cheaper, it looks better and it just has a more compelling story behind it.

It’s truly new in lots of ways, it’s cutting edge tech that lives up to its price tag and it really is one of the best cars in the world.